Retinal prosthetics: science fiction or a vision for the future?

“Is it a fact – or have I dreamt it – that, by means of electricity, the world of matter has become a great nerve, vibrating thousands of miles in a breathless point of time?”
– Nathaniel Hawthorne, The House of the Seven Gables (1851)

In the 1987 film Predator, the formidable alien has the power of invisibility, to travel between stars and to hunt using superhuman thermal vision. Visual prostheses – or bionic eyes – provide artificial electronic visual sensation to the brain. In most senses, this relates to simulating normal physiological capabilities. But it can also signify surpassing the ordinary function of eye, for example, by acquiring the performance-enhancing qualities of a fictional extraterrestrial species.

Although a number of strategies have been trialled for restoring vision, for instance, stem cell transplantation and gene therapy, one of the contemporary approaches has been to artificially replace the dysfunctional neuronal components that generate the optic pathway from the eye to the brain. Surgically implanting electrode arrays into the retina enables the human eye to convert light into electrical signals. These are then passed to retinal ganglion cells for processing [1].

An intact functional visual pathway from the retina to the brain is required for traditional retinal prostheses. Patients with inherited retinal degenerative disease, such as retinitis pigmentosa (RP), and dry age-related macular degeneration (AMD) – where no adequate therapies currently exist – are thus likely to benefit. Where the structural integrity of the retina is compromised, however, or in abnormal early visual development, a retinal prosthesis is unlikely to be effective.

How do bionic eyes work?

Conceptually, a prosthesis could be inserted at any given juncture in the visual pathway. In one prototype, a small camera is mounted on a pair of glasses to capture images. These signals are transposed initially from a microprocessor, which converts data into electrical signals, and subsequently to a microelectrode array implanted on the retina. After preliminary processing, the signal is transmitted along the optic nerve to the brain to ultimately construct a retinotopic visual image [2]. In the subretinal method, an electrode is implanted between the retinal pigment epithelium and malfunctioning photoreceptors; an epiretinal approach may equally be used with an implant affixed onto the retinal surface, at the ganglion cell layer.

“Further research is needed to identify which patients are likely to benefit from prosthetics and, importantly, at what stage the device should be introduced”

Alternative techniques depend on an implant which transmits images directly to the occipital cortex in patients with acquired visual impairment. Directly activating neurons, via a surgical implant in the brain, has the potential to bypass damaged retinal cells in the eye completely [5]. These cortical visual prostheses do not rely on a working optic nerve and could therefore open this technology up to patients with virtually all causes of acquired blindness, regardless of the ocular pathology.

Worldwide, there are a number of emerging systems. Most devices have focused on patients with degenerative retinopathy, such as RP and AMD. Although a wealth of technology is materialising, many models are at early stages of development and, so far, few have received commercial market approval.

The Argus® II Retinal Prosthesis System, developed by Second Sight, is an epiretinal device consisting of a video camera mounted on glasses, a portable visual processing unit, and a wireless 60-electrode stimulating array [6]. It superseded the first-generation model, Argus I, a 16-electrode modified cochlear implant. In 2011, it was the first retinal prosthesis in Europe to receive certification mark (CE) approval for commercial use. It later received Food & Drug Administration (FDA) regulatory approval in the US in 2013. Alpha IMS, created by Retina Implant AG in Germany, has also gained European CE marking [7]. It is comprised of a wirelessly-powered, subretinal microchip with 1500 photodiodes; this photosensitive array stimulates the bipolar cell layer in the retina. 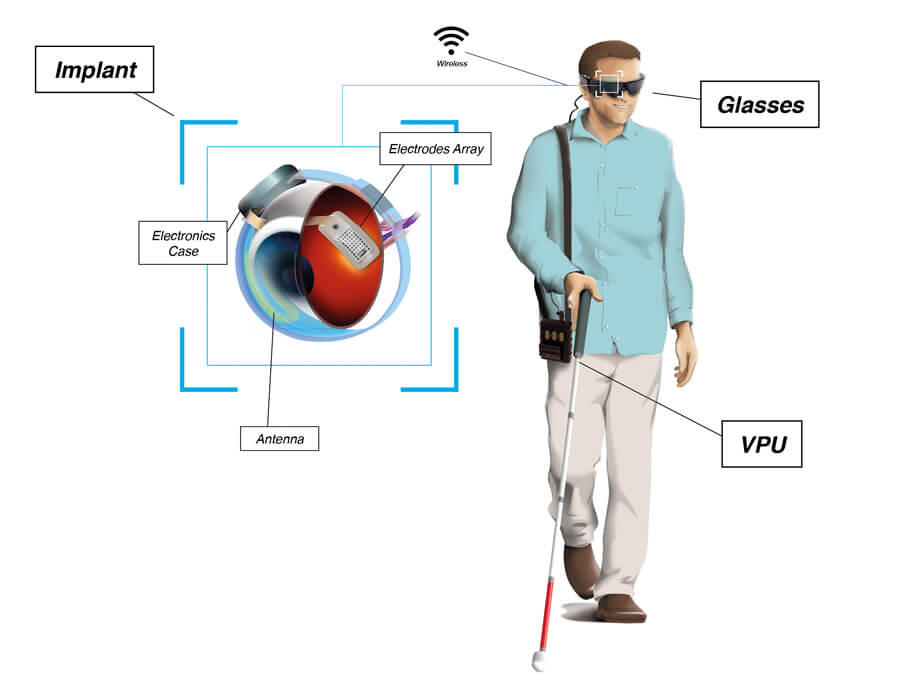 Two devices are being developed by Pixium Vision but are yet to gain commercial approval. The Iris® II Bionic Vision System is an epiretinal device, incorporating 150 electrodes, which is undergoing initial safety studies in a small number of subjects [8]. PRIMA is a photovoltaic subretinal implant which delivers images to the eye in bursts of near-infrared light. Researchers at Stanford University are piloting the device in patients with geographic atrophy from advanced dry AMD [9].

What are the results?

Argus® II has allowed patients with RP to see geometric shapes and high-contrast letters in black and white after total loss of central vision [6]. The best grating visual acuity achieved with the device to date is logMAR 1.8 (Snellen equivalent of 20/1262). At five years, the benefits of the system have been favourable [10] and feasibility trials have now been extended to evaluate the device in patients with severe dry AMD who are considered legally blind [11].

Alpha IMS has established the highest single subject visual acuity of any device, with a best measurement of 20/546 on contrast-reversal Landolt-C testing [7], although the manufacturer Retina Implant AG has since ceased trading. Of the 29 participants enrolled in the trial, with advanced RP or cone-rod dystrophies, 25 (86%) could perceive light and six subjects could detect motion. In addition, 45% of patients reported useful daily life experiences with the implant. There remains nonetheless large variation in visual outcomes – including motion detection, target localisation, form discrimination and orientation / mobility – between patients with all devices.

What are the risks and possible long-term effects?

Constraints on the hardware and software of devices may ultimately limit longevity. Likely as a result of stress on biological tissue, compared to their epiretinal counterparts, subretinal systems appear to have a shorter lifespan. The current required for the complex arrangement of inductive coils is in the region of 50mA [12] and scientists are cautious of destructive in vivo heat generation. Extrapolating the progress in restoring visual function, based on the number of electrodes, a higher density array with upwards of a thousand electrodes could theoretically restore the patient’s ability to recognise faces and read large print. Difficulties arise in obtaining such fine resolution with the existing hardware given the dangerous charge density of such sophisticated circuit architecture [2]. Electrical engineers are exploring novel heat-resistant materials, such as liquid crystal polymers [13] and organic conductors – studied in animal experiments – which may offer superior biocompatibility [3].

Risks associated with both the device and implant surgery can be anticipated and the safety profile of retinal prosthetics has been monitored     closely over the years. For the initial 30 patients in the Argus® II trial, approximately one third experienced a serious adverse event in the first three years [10]. Complications included conjunctival erosion (four), hypotony (four), culture-negative presumed endophthalmitis (three) and retinal detachment (two). For one patient, requiring treatment for recurrent conjunctival erosion, the implant was removed. Most events occurred during the first year and, encouragingly, at five years post-implant, 60% of participants experienced no device-related adverse events. In addition, 24 of the 30 devices remained implanted and functioning at five years. Beyond this, the longer-term risks are unknown and it is recommended that patients with new devices are followed up at least annually. 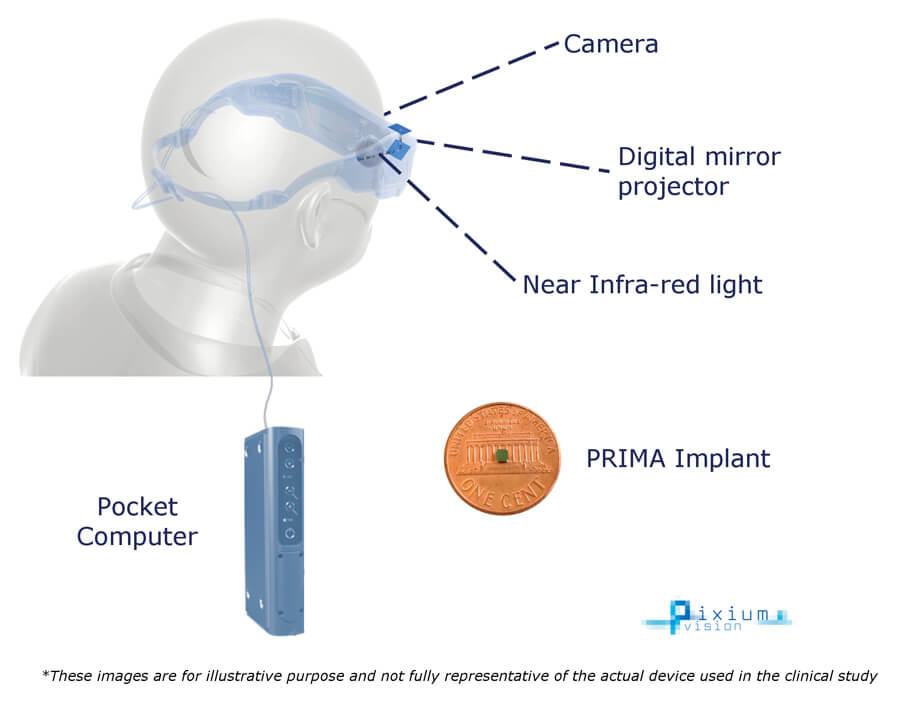 What obstacles have emerged?

Outputs from artificial visual devices may contrast significantly from normal vision. Electrical stimulation typically elicits discrete light sensations, called phosphenes, which are described as images in a number of different shapes. Measuring the success of these devices has thus been a contentious issue and employing a battery of tests, including psychophysical tests, performance in day-to-day activities and subjective patient evaluation, has been suggested [14]. These measures differ from conventional visual acuity and field tests, in order to detect smaller tangible changes associated with ultra-low levels of vision, and better reflect quality of life. Further research is needed to identify which patients are likely to benefit from prosthetics and, importantly, at what stage the device should be introduced.

The next step in retinal prosthetics is exploring the mechanisms that underlie neuroplasticity following loss of vision and subsequently introducing meaningful information to the visually-deprived brain. There is compelling evidence that the adult brain is malleable. Take taxi drivers in London mastering ‘The Knowledge’, for example: after four years of training, those who qualified experienced increased grey matter in the hippocampus and displayed improvements on memory tests [15]. In a similar way, even after many years of little or no formed sight, the brain is able to respond to retinal stimulation. Understanding the structural brain changes driving neurorehabilitation will help design next generation models of retinal prosthetics.

The future of bionic eyes

Future approaches to this technology include designing a system able to switch to different imaging modes. Human vision has evolved to discern the visible electromagnetic spectrum. Perceptible wavelengths range from 380-740 nanometres, although there is evidence that the aphakic eye can perceive ultraviolet light. One notable illustration is Claude Monet, who complained of cyanopsia after cataract removal; many of his paintings of water lilies after this period diverged towards bluer hues [16]. At the other end of the spectrum, infrared radiation – utilised by snakes and mosquitoes – could allow low vision users to identify potential hazards in the environment, for example, a hot drink or an open fire. Second Sight sell thermal imaging devices and it appears they are investing in projects to expand this technology into the retinal prosthetics market [17].

Like all new technology, retinal implants are expensive: ‘bionic eye’ treatment, including equipment and follow-up, is estimated to cost £150,000 per patient [18]. It is unclear at present whether these new technologies would be funded on the NHS. However, the decision by National Institute of Health & Care Excellence (NICE) to recommend Luxturna® for patients with visual loss due to RPE65 genetic mutations offers hope that commissioning groups will consider funding retinal prosthetics [19]. The future of bionic eyes is running hand-in-hand with our expanding understanding of the visual system and could soon transform from a fantasy of science fiction to a discernible reality. Although emulating Predator’s aptitude for interstellar travel seems unlikely, the evolution of bionic eyes could surely see us ascending further up the food chain in the near future.